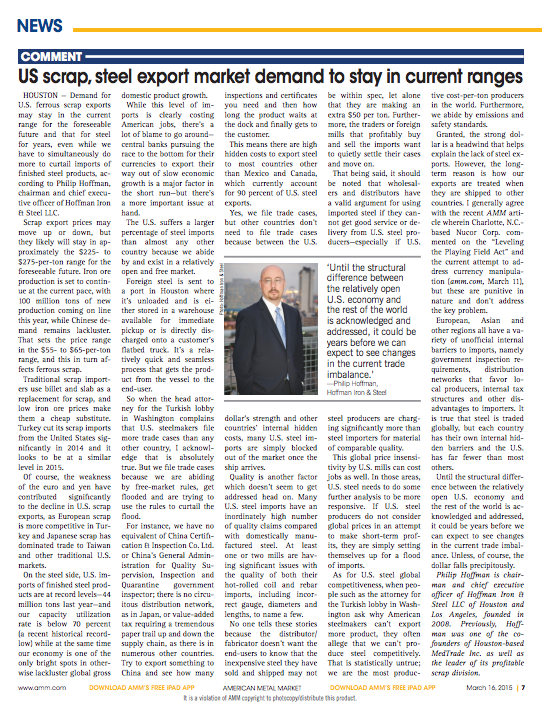 HOUSTON — Demand for U.S. ferrous scrap exports may stay in the current range for the foreseeable future and that for steel for years, even while we have to simultaneously do more to curtail imports of finished steel products, ac- cording to Philip Hoffman, chairman and chief execu- tive officer of Hoffman Iron & Steel LLC.

Scrap export prices may move up or down, but they likely will stay in approximately the $225- to $275-per-ton range for the foreseeable future. Iron ore production is set to continue at the current pace, with 100 million tons of new production coming on line this year, while Chinese demand remains lackluster. That sets the price range in the $55- to $65-per-ton range, and this in turn affects ferrous scrap.

Traditional scrap importers use billet and slab as a replacement for scrap, and low iron ore prices make them a cheap substitute. Turkey cut its scrap imports from the United States significantly in 2014 and it looks to be at a similar level in 2015.

Of course, the weakness of the euro and yen have contributed significantly to the decline in U.S. scrap exports, as European scrap is more competitive in Turkey and Japanese scrap has dominated trade to Taiwan and other traditional U.S. markets.

On the steel side, U.S. imports of finished steel products are at record levels—44 million tons last year—and our capacity utilization rate is below 70 percent (a recent historical record-low) while at the same time our economy is one of the only bright spots in otherwise lackluster global gross domestic product growth.

While this level of imports is clearly costing American jobs, there’s a lot of blame to go around—central banks pursuing the race to the bottom for their currencies to export their way out of slow economic growth is a major factor in the short run—but there’s a more important issue at hand.

The U.S. suffers a larger percentage of steel imports than almost any other country because we abide by and exist in a relatively open and free market. Foreign steel is sent to a port in Houston where it’s unloaded and is either stored in a warehouse available for immediate pickup or is directly discharged onto a customer’s flatbed truck. It’s a relatively quick and seamless process that gets the product from the vessel to the end-user.

So when the head attorney for the Turkish lobbyin Washington complains that U.S. steelmakers file more trade cases than any other country, I acknowledge that is absolutely true. But we file trade cases because we are abiding by free-market rules, get flooded and are trying to use the rules to curtail the flood.

For instance, we have no equivalent of China Certification & Inspection Co. Ltd. or China’s General Administration for Quality Supervision, Inspection and Quarantine government inspector; there is no circuitous distribution network, as in Japan, or value-added tax requiring a tremendous paper trail up and down the supply chain, as there is in numerous other countries.

Try to export something to China and see how many inspections and certificates you need and then how long the product waits at the dock and finally gets to the customer. This means there are high hidden costs to export steel to most countries other than Mexico and Canada, which currently account for 90 percent of U.S. steel exports. Yes, we file trade cases, but other countries don’t need to file trade cases because between the U.S. dollar’s strength and other countries’ internal hidden costs, many U.S. steel imports are simply blocked out of the market once the ship arrives.

Quality is another factor which doesn’t seem to get addressed head on. Many U.S. steel imports have an inordinately high number of quality claims compared with domestically manufactured steel. At least one or two mills are having significant issues with the quality of both their hot-rolled coil and rebar imports, including incorrect gauge, diameters and lengths, to name a few. No one tells these stories because the distributor/fabricator doesn’t want the end-users to know that the inexpensive steel they have sold and shipped may not be within spec, let alone that they are making an extra $50 per ton. Furthermore, the traders or foreign mills that profitably buy and sell the imports want to quietly settle their cases and move on.

That being said, it should be noted that wholesalers and distributors have a valid argument for using imported steel if they cannot get good service or delivery from U.S. steel producers—especially if steel producers are charging significantly more than steel importers for material of comparable quality.

This global price insensitivity by U.S. mills can cost jobs as well. In those areas, U.S. steel needs to do some further analysis to be more responsive. If U.S. steel producers do not consider global prices in an attempt to make short-term profits, they are simply setting themselves up for a flood of imports.

As for U.S. steel global competitiveness, when people such as the attorney for the Turkish lobby in Washington ask why American steelmakers can’t export more product, they often allege that we can’t produce steel competitively. That is statistically untrue; we are the most productive cost-per-ton producers in the world. Furthermore, we abide by emissions and safety standards.

Granted, the strong dollar is a headwind that helps explain the lack of steel exports. However, the long-term reason is how our exports are treated when they are shipped to other countries. I generally agree with the recent AMM article wherein Charlotte, N.C.-based Nucor Corp. commented on the “Leveling the Playing Field Act” and the current attempt to address currency manipulation (amm.com, March 11), but these are punitive in nature and don’t address the key problem.

European, Asian and other regions all have a variety of unofficial internal barriers to imports, namely government inspection requirements, distribution networks that favor local producers, internal tax structures and other disadvantages to importers. It is true that steel is traded globally, but each country has their own internal hidden barriers and the U.S. has far fewer than most others.

Until the structural difference between the relatively open U.S. economy and the rest of the world is acknowledged and addressed, it could be years before we can expect to see changes in the current trade imbalance. Unless, of course, the dollar falls precipitously.

Philip Hoffman is chairman and chief executive officer of Hoffman Iron & Steel LLC of Houston and Los Angeles, founded in 2008. Previously, Hoffman was one of the co-founders of Houston-based MedTrade Inc. as well as the leader of its profitable scrap division.